The Pennsylvania Memorial at Gettysburg, in morning light.

The Union battle lines now marked with monuments near the memorial were occupied on the Battle of Gettysburg, Second Day, by artillery and reinforced late in the day with infantry.

Previously-placed Gettysburg monuments commemorating commonwealth units include the 72nd Pennsylvania Infantry Monuments of 1883 and 1891 at The Angle. Civil War governor Andrew G. Curtin's idea for a "Pennsylvania Memorial Hall" by the "Gettysburg Memorial Hall Association of the Pennsylvania Reserves Volunteer Corps" was in an 1889 bill vetoed by Governor James A. Beaver. The hall was to be was to be 60 ft (18 m) across on Little Round Top and display "a treasury of trophies and mementos of all the Pennsylvania regiments that fought at Gettysburg" Instead, the site for the "Pennsylvania Park" was selected in 1909, and the PA memorial was planned for completion along with a peace memorial for the 1913 50th battle anniversary After the PA memorial structure was completed in 1910 with Round Top Branch transport of materials to the nearby Hancock Station, Humphreys Avenue on the east side was surveyed in 1911.

Atop the memorial is The Goddess of Victory and Peace, by Samuel Murray. The sculpture was forged from melted-down cannons in 1909-10. 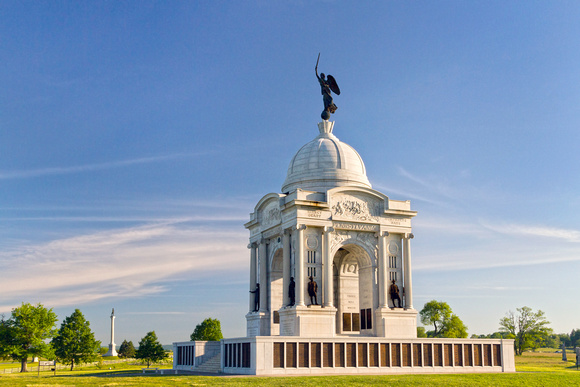