The 72nd Pennsylvania Infantry Monument is the name of two Gettysburg Battlefield monuments: an 1883 position marker and a larger 1891 statuary memorial. The statuary monument, erected "by 72nd Regt", identifies the regiment as Pennsylvania Volunteers ("P.V.") and "Philadelphia Fire Zouaves".

At the Battle of Gettysburg, it defended the Angle on July 2 and 3. On the evening of the 2nd, it helped defeat Confederate Brigade General Ambrose R. Wright's attack, advancing just over the stone wall. The next day, it was placed in reserve for the brigade near the copse of trees. During Pickett's Charge, its position served as a rallying point for the left wing of the 71st and two companies of the 106th Pennsylvania, which had been driven back. Despite Brigadier General Alexander S. Webb's best efforts, these troops refused to counterattack for several minutes. This might have been due to the 71st's colorbearers being shot down. (Civil War regiments often followed the regimental flag since orders would have been difficult to hear on the battlefield.) At Gettysburg, Col. Baxter replaced the wounded General Webb in command of the Brigade, and Lt. Col. Hesser replaced him in command of the 72nd Regiment. 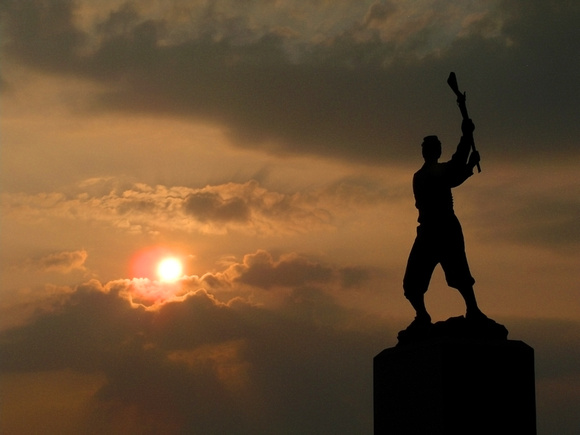