The Union Line from The Copse of Trees to The Round Tops in morning light.

On the first day of the Battle of Gettysburg, Cemetery Ridge was unoccupied for much of the day until the Union army retreated from its positions north of town, when the divisions of Brig. Gen. John C. Robinson and Maj. Gen. Abner Doubleday from the I Corps were placed on the northern end of the ridge, protecting the left flank of the XI Corps on Cemetery Hill. After the XII Corps arrived, Maj. Gen. John W. Geary's Second Division was sent to the southern end of the ridge near Little Round Top; Brig. Gen. John Buford's cavalry division formed a skirmish line in the fields between Cemetery Ridge and Seminary Ridge. The III Corps arrived about 8 p.m. and replaced Geary's division (which was sent to Culp's Hill); the II Corps arrived about 10:30 p.m. and camped immediately behind the III Corps.

During the morning of the battle's 2nd day (July 2), Army of the Potomac commander Maj. Gen. George G. Meade shifted units to receive an expected Confederate attack on his positions. The II Corps was placed in the center of Cemetery Ridge, with Brig. Gen. Alexander Hays's division on the corps' right, John Gibbon's division in the center around the Angle, and John C. Caldwell's division on the left, adjacent to the III Corps; Robinson's division of the I Corps was placed in reserve behind the XI Corps. The V Corps was formed in reserve behind the II Corps. In the late afternoon, the end of the Confederate Maj. Gen. Lafayette McLaws's assault drove portions of Maj. Gen. Daniel Sickles's III Corps line back to the southern end of Cemetery Ridge, and the Maj. Gen. Ambrose Wright's Confederate division temporarily captured the southern end of the Angle before being driven back to Seminary Ridge by the Philadelphia Brigade.

The Confederate artillery bombardment preceding Pickett's Charge on July 3 battered Cemetery Ridge, and Union artillery on the ridge counterfired to Seminary Ridge. Thirty-four Union cannons were disabled, but the three Confederate divisions of the subsequent infantry assault (Pickett's of the First Corps and Pettigrew's and Trimble's of the Third Corps), attacked the Union II Corps at the "stone fence" at the Angle. Heavy rifle and artillery fire prevented all but about 250 Confederates led by Lewis Armistead from penetrating the Union line to the high water mark of the Confederacy. Armistead was mortally wounded. Two brigades of Anderson's Division, assigned to protect Pickett's right flank during the charge, reached a more southern portion of the Union line at Cemetery Ridge soon after the repulse of Pickett's Division, but were driven back with 40% casualties by the 2nd Vermont Brigade. 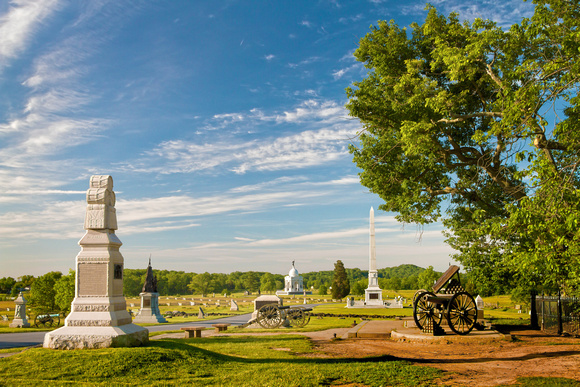