Longstreet's actions at the Battle of Gettysburg would be the centerpiece of the controversy that surrounded him for over a century.[36] Ahead of his troops he arrived on the battlefield late in the afternoon of the first day, July 1, 1863. By then, two Union corps had been driven by Ewell and Hill back through the town into defensive positions on Cemetery Hill. Lee had not intended to fight before his army was fully concentrated, but chance and questionable decisions by A.P. Hill brought on the battle, which was an impressive Confederate victory on the first day. Meeting with Lee, Longstreet was concerned about the strength of the Union defensive position and advocated a strategic movement around the left flank of the enemy, to "secure good ground between him and his capital," which would presumably compel the Union commander, Maj. Gen. George G. Meade, to attack defensive positions erected by the Confederates. Instead, Lee exclaimed, "If the enemy is there tomorrow, we must attack him." 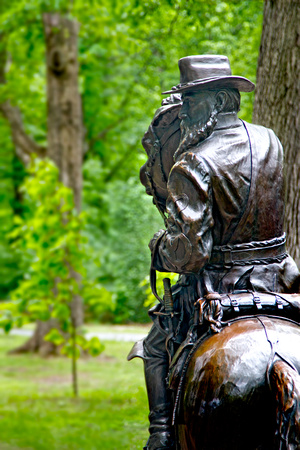