Cannon at The Angle

A cannon rests on The Angle at Gettysburg.

The Bloody Angle is a Gettysburg Battlefield area which includes the 1863 Copse of Trees used as the target landmark for Pickett's Charge, the 1892 monument that marks the high-water mark of the Confederacy, and several other Battle of Gettysburg monuments. The area is where 1500 Confederate Virginians broke through the July 3, 1863, Union line on Cemetery Ridge. The proper noun "Bloody Angle" became common during the battlefield's commemorative era after being used as early as 1893.

The Angle is one of the few places named after the battle that is not named for a person (cf. The Loop). As with Hancock Avenue along the east wall that extends northward, the original route planned for the 1893 Gettysburg Electric Railway was along the west wall of The Angle that extends southward, and although the trolley line was moved along the Emmitsburg Road, the Gettysburg National Military Park did not acquire the trolley land at The Angle until congressional funding was appropriated in 1917. 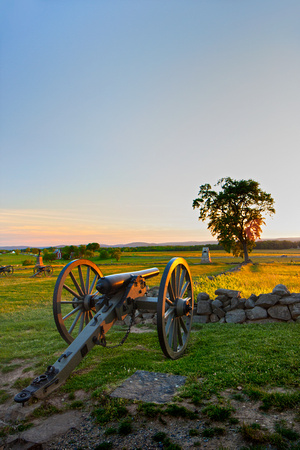