Memorial to the 20th Maine at Little Round Top, Gettysburg.


The most notable battle was the regiment's decisive role on July 2, 1863, in the Battle of Gettysburg, where it was stationed on Little Round Top at the extreme left of the Union line. When the regiment came under heavy attack from the Confederate 15th Alabama regiment, part of the division led by Maj. Gen. John Bell Hood, the 20th Maine ran low on ammunition after one and a half hours of continuous fighting; it responded to the sight of rebel infantry forming again for yet another push at them by charging downhill with fixed bayonets, surprising and scattering the Confederates, thus ending the attack on the hill. The 20th Maine and the adjacent 83rd Pennsylvania together captured many men from the 47th and 15th Alabama regiments. Had the 20th Maine retreated from the hill, the entire Union line would have been flanked, and would have most likely lost the battle of Gettysburg, although there is much debate on the subject. Union morale and support for the war was wavering, due to many defeats. If the Union had lost the battle of Gettysburg the Confederate army could have possibly marched on to Washington D.C. and ended the war. The 20th Maine’s action in holding the hill has been credited with helping to turn the tide of the war.
It has been suggested that Lt. Holman S. Melcher[2] initiated the charge, although Col. Chamberlain has been credited by most historians for ordering the desperate attack.[3] This action is depicted in the novels The Killer Angels and Courage on Little Round Top, and was subsequently an important scene in the movie Gettysburg. 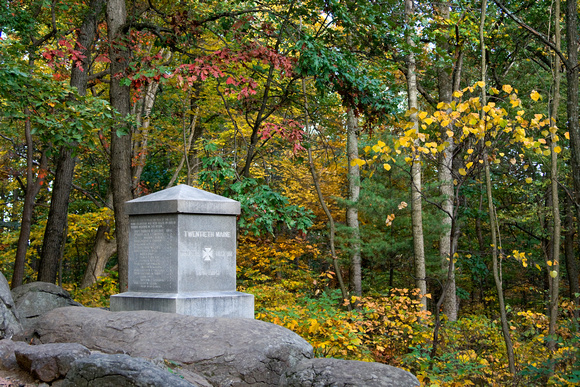