After Confederate attacks on both Union flanks had failed the day and night before, Lee was determined to strike the Union center on the third day. On the night of July 2, General Meade correctly predicted at a council of war that Lee would try an attack on his lines in the center the following morning.

The infantry assault was preceded by a massive artillery bombardment that was meant to soften up the Union defense and silence its artillery, but was largely ineffective. Approximately 12,500 men in nine infantry brigades advanced over open fields for three-quarters of a mile under heavy Union artillery and rifle fire. Although some Confederates were able to breach the low stone wall that shielded many of the Union defenders, they could not maintain their hold and were repulsed with over 50% casualties, a decisive defeat that ended the three-day battle and Lee's campaign into Pennsylvania.

Years later, when asked why his charge at Gettysburg failed, General Pickett replied: "I've always thought the Yankees had something to do with it."
Categories & Keywords
Category:
Subcategory:
Subcategory Detail:
Keywords:
William E. Ames - amesphotos.com 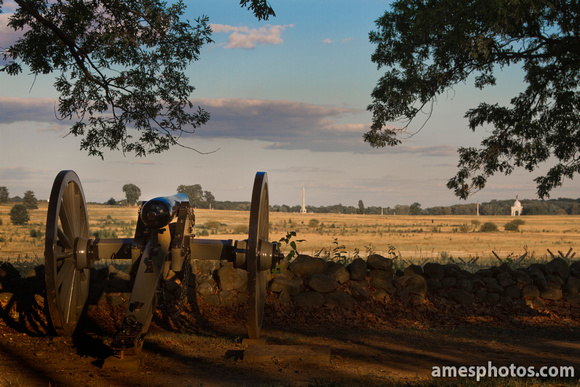